Literary Treks 120: Kathy and Coco are a Beach Boys Song 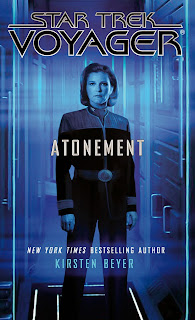 The relaunch of Voyager under the direction of Kirsten Beyer has seen the return of the crew and the Full Circle fleet to the Delta Quadrant as well Kathryn Janeway back from the “dead” with the trilogy that began in Protectors coming to a rapid conclusion.

In this episode of Literary Treks, hosts Matthew Rushing and Dan Gunther are joined by Kirsten Beyer to talk about Atonement. We discuss the puzzle pieces coming together, creation, neat cameos, character arcs, B’Elanna, Chakotay and Janeway, downtime, the truth, At-One-ment, some of her favorite things, and what’s coming next.

In the news segment, we talk about the latest issue of the Star Trek/Green Lantern crossover #3.

Next episode: Literary Treks 121: Wall Street of the '80s