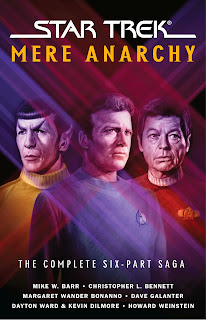 There are very few times in The Original Series where the trinity of Kirk, Spock, and McCoy is not a part of an episode, but during the years between TOS and TMP the characters had taken different paths. Kirk was an admiral, McCoy a country doctor, and Spock was on Vulcan attending to a private matter. With the Mere Anarchy series spanning the entirety of TOS, the writers were given an opportunity to do something a little different with the characters.

In this episode of Literary Treks, hosts Matthew Rushing and Dan Gunther talk about Shadows of the Indignant. We discuss the e-book series, the Motion Picture era, dissatisfaction, a buddy cop feel, strange bedfellows, greed, and our ratings.

In our news segment, we remind everyone that Atonement is out now!