Ever since the Star Trek: Deep Space Nine continuity was jumped forward around the time of Star Trek: Destiny, DS9 fans have been wondering what happened to the Ascendants storyline? Why is Kira now a Vedek, and how did Ro become captain? And whatever happened with the whole Iliana Ghemor situation?

If the cover of this month's release is any indication, we may be getting the answer to at least one of those questions, as well as a continuation of the story from The Fall: Revelation and Dust! Check out the cover and publisher's description for the all-new Sacraments of Fire by David R. George III, officially released today!

And look for the continuation of this story in Ascendance, coming at the end of the year! 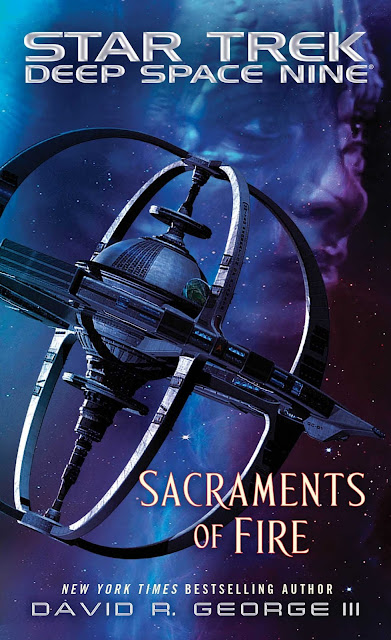 
Days after the assassination of Federation President Nan Bacco on Deep Space 9, the unexpected appearance of a stranger on the station raises serious concerns. He seems dazed and confused, providing—in a peculiar patois of the Bajoran language—unsatisfactory answers. He offers his identity as Altek, of which there is no apparent record, and he claims not to know where he is or how he got there. A quick scan confirms the visitor is armed with a projectile weapon—a firearm more antiquated than, but similar to, the one that took President Bacco’s life. But the Bajoran liaison to the station believes that Altek has been sent from the Prophets, out of a nearby wormhole. The last time such an event occurred, it was to reassure Benjamin Sisko of his place as the Emissary. For what purpose has Altek now been sent out of the Celestial Temple?

Previous Release: The Next Generation: Armageddon's Arrow
Next Release: New Frontier: The Returned, Part I