It has already been showing up on bookstore shelves all over North America, but today is the official release date for the latest entry in the TNG series: from Dayton Ward, it's Armageddon's Arrow! This one sounds like an exciting new direction for the series, and I'll be picking up my own copy ASAP!

My review of Armageddon's Arrow 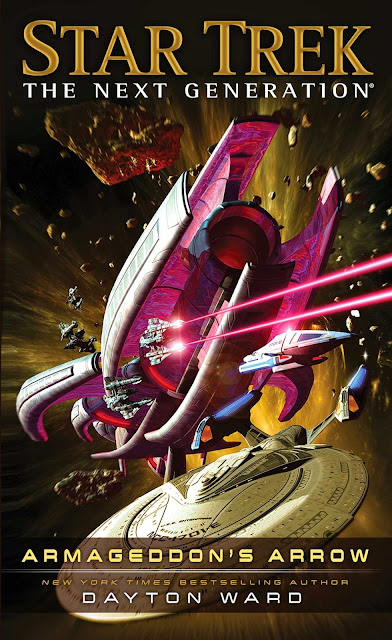 
It is a new age of exploration, and the U.S.S. Enterprise is dispatched to “the Odyssean Pass,” a region charted only by unmanned probes and believed to contain numerous inhabited worlds. Approaching a star system with two such planets, Captain Jean-Luc Picard and his crew find a massive alien vessel, drifting in interstellar space for decades. Sensors detect life aboard the derelict—aliens held in suspended animation. Thought to be an immense sleeper ship, the vessel actually is a weapon capable of destroying entire worlds...the final gambit in a war that has raged for generations across the nearby system. Captain Picard is now caught in the middle of this conflict and attempts to mediate, as both sides want this doomsday weapon…which was sent from the future with the sole purpose of ending the interplanetary war before it even began!

Purchase The Next Generation: Armageddon's Arrow: