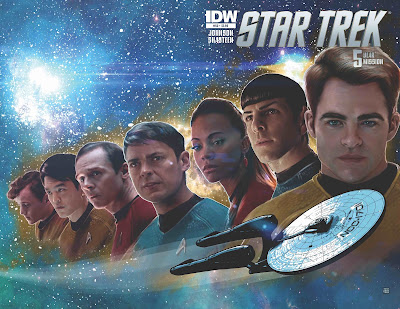 As fans, we get our Star Trek fix in many different forms: television, film, novels, and comics. And no comic publisher has been quite so prolific as IDW when it comes to publishing Star Trek stories! Waypoint, Ongoing, Boldly Go, New Visions, and Stranger Worlds are just a few of the titles that IDW publishes on a regular basis.

In this episode of Literary Treks, hosts Dan Gunther and Bruce Gibson welcome Sarah Gaydos and Mike Johnson from IDW to the show! We ask them about their personal Star Trek stories, the Boldly Go series, Crossovers, Waypoint, new series coming up, and then ask some questions submitted by our listeners on the Babel Conference.

In the news segment, we discuss how the delay of Star Trek: Discovery will affect the book and comic release schedule and share our thoughts on the newest issue of the Star Trek/Green Lantern crossover comic.