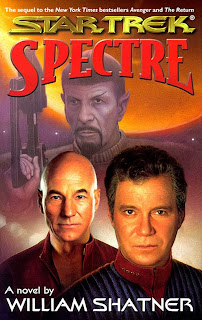 Captain James T. Kirk: a name that has blazed across the quadrant for over a hundred years, shaping political events and influencing hundreds of worlds. However, his influence is not limited merely to our universe. During his first five-year mission, Kirk convinced Spock from the Mirror Universe to rebel against the evil Terran Empire, and the consequences of that action have now caught up with the Starfleet legend in the 24th century!

In this episode of Literary Treks, hosts Dan Gunther and Bruce Gibson welcome Matthew Rushing to talk about William Shatner's Spectre. We discuss the Shatnerverse, Kirk in the 24th century, responsibility, Kirk and Scotty, looking in the mirror, Janeway, a mirror imposter, the prime directive, and our ratings.

In the news we review Waypoint #3.