Enterprise: The Good That Men Do
by Andy Mangels & Michael A. Martin 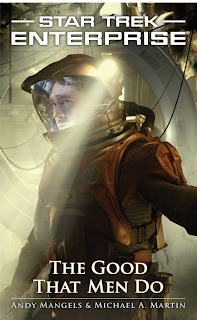 When the final episode of Star Trek: Enterprise aired, it was promoted as a "valentine" to the fans. However, its reception left much to be desired. Featuring a nonsensical plot and laughable villains, "These Are the Voyages" was not well-loved. Therefore, when it was announced that an Enterprise "relaunch" story would undo some of the worst parts of that episode, many Enterprise fans rejoiced!

In this episode of Literary Treks, hosts Matthew Rushing and Dan Gunther talk about the Enterprise novel The Good That Men Do. We discuss the last episode of Enterprise, the audacity of rewriting canon, the set up, bringing Trip back, lack of vision, prequels, a tight story, swiss cheese, head canon, Trip and T’Pol, the foundation of the Romulan War, and our ratings.

In the news, we remind everyone that A Pocket Full of Lies is out!