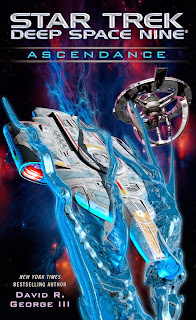 The Deep Space Nine relaunch had been building to a showdown with the Ascendants, and The Soul Key left fans with a massive cliffhanger. However, with Star Trek: Destiny bringing all the crews together, the Ascendants storyline was dropped in order to align the DS9 books with the rest of the 24th century. Fans have long wondered what transpired with the Ascendants and how it spurred major changes for many of the DS9 characters, and luckily the answers have finally arrived!

In this episode of Literary Treks, hosts Matthew Rushing and Dan Gunther are joined by author David R. George III to talk his latest Deep Space Nine book: Ascendance. We discuss weaving the tapestry, research, what to tell and what not to tell, prophesies, character arcs, Sisko, faith and belief, working things in, what's next, and where to find David online.

In the news segment, we let everyone know that we are covering The Good That Men Do next week.