Happy Saturday, everyone! StarTrek.com has just released the cover for the next Deep Space Nine novel, Sacraments of Fire by New York Times bestselling author David R. George III! Check out this gorgeous cover art below, featuring the new Deep Space Nine station and the fearsome visage of a long-forgotten foe...

As always, use the links below to pre-order Sacraments of Fire from Amazon. By doing so, you will be helping to support Trek Lit Reviews! 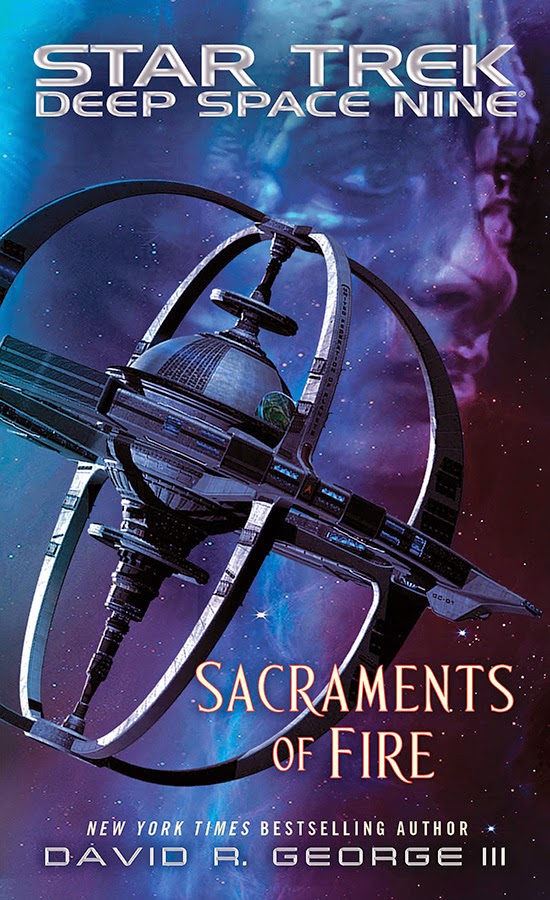 Days after the assassination of Federation President Nan Bacco on Deep Space 9, the unexpected appearance of a stranger on the station raises serious concerns. He seems dazed and confused, providing—in a peculiar patois of the Bajoran language—unsatisfactory answers. He offers his identity as Altek, of which there is no apparent record, and he claims not to know where he is or how he got there. A quick scan confirms the visitor is armed with a projectile weapon—a firearm more antiquated than, but similar to, the one that took President Bacco's life. But the Bajoran liaison to the station believes that Altek has been sent from the Prophets, out of a nearby wormhole. The last time such an event occurred, it was to reassure Benjamin Sisko of his place as the Emissary. For what purpose has Altek now been sent out of the Celestial Temple?