A few bits today about books being released next year:

First up, newcomer to Trek Lit, Tony Daniel, has a TOS novel coming out at the end of February 2013, and cover art has just been released. In addition, we've learned that the story involves the Horta, the silicon-based rock-eating lifeforms from the first season episode "The Devil in the Dark." Check it out below: 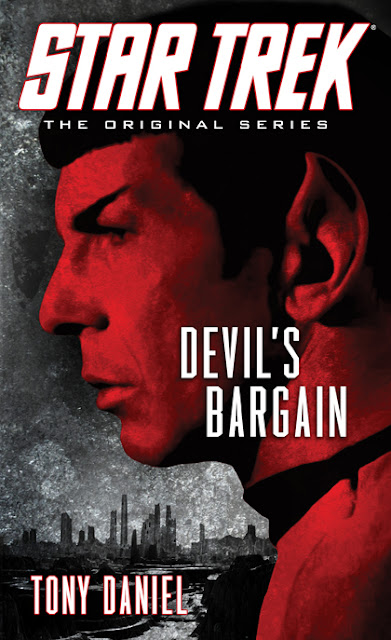 Next up, William Leisner also has a TOS novel coming in the new year, The Shocks of Adversity, taking up June's publication spot. The back-cover blurb has just been revealed by Simon & Schuster, and you can read that below:

Located far beyond the boundaries of explored space, the Goeg Domain is a political union of dozens of planets and races. When the U.S.S. Enterprise arrives in its territory to investigate an interstellar phenomenon, Commander Laspas of the Domain Defense Corps is at first guarded, then fascinated to discover the existence of an alliance of worlds much like his own, and finds a kindred spirit in Captain James T. Kirk. And when the Enterprise is attacked by the Domain’s enemies, crippling the starship’s warp capability and leaving its crew facing the prospect of a slow, months-long journey home, the Goeg leader volunteers the help of his own ship, offering to combine the resources of both vessels to bring the Enterprise to a nearby Domain facility to make the necessary repairs.

But what at first seems to be an act of peace and friendship soon turns out to be a devil’s bargain, as Kirk and the Enterprise crew learn that there are perhaps more differences than similarities between the Federation and the Domain. When the Goeg’s adversaries strike again, the Enterprise is drawn deeper and inexorably into the conflict, and Kirk begins to realize that they may have allied themselves with the wrong side…

Check out the 2013 releases page for information on all new Star Trek fiction coming in 2013, including links to purchase the titles on Amazon.com. I'm looking forward to finishing the year with a few more reviews, and bringing you much more in the new year, both old and new! I hope everyone is having a wonderful holiday season. Take care!
Posted by Dan Gunther at 10:50 PM