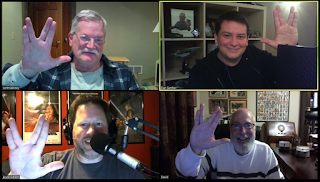 Since its debut in September of 1966, Star Trek has held a cherished place in the hearts of fans the world over. This beloved show has been covered so extensively in books, documentaries, and retrospectives that we must have learned everything there is to know about it by now, right? Wrong! If you think you've seen everything there is to see about the series that started it all, I challenge you to pick up the subject of this week's show!

In this episode of Literary Treks, hosts Bruce Gibson and Dan Gunther speak with David Tilotta and Curt McAloney, authors of Star Trek: Lost Scenes. We discuss how they became fans of Star Trek, the origin of the book, their website startrekhistory.com, the process of researching the material, behind the scenes, deleted scenes, and bloopers from The Original Series, and wrap up with what they have planned for the future and where you can find them online.

At the top of the show, we review the latest comic from IDW, issue #2 of Star Trek vs. Transformers.