Hey everyone! We have some news today regarding IDW's December solicitations.

First up is issue #4 of Star Trek vs. Transformers.

With the Enterprise disabled by the Klingon-Decepticon alliance, things look dire for Spock, Optimus Prime, and the landing team. But with the Autobots’ help, can Captain Kirk come up with a solution to save the day from a massive Cybertronian threat?


Star Trek vs. Transformers #4 is written by John Barber and Mike Johnson, with art by Phillip Murphy.

There will be an A and a B cover, plus a retailer incentive cover. The A cover, by artist Phillip Murphy, has not yet been released, but the other two can be viewed below.

Next up is the conclusion to the Terra Incognita series, issue #6, by Scott and David Tipton, with art by Angel Hernandez.

The latest installment of THE NEXT GENERATION Mirror Universe saga comes to a twisted conclusion as Mirror Barclay unleashes his fiendish plan on Captain Jean-Luc Picard and the crew of the U.S.S. Enterprise-D!


Terra Incognita comes to you with four cover options. The photo cover as well as the variant cover by Elizabeth Beals haven't been revealed yet, but we do have two other covers to show you!


Speaking of J.K. Woodward, the artist has been active on Instagram lately, posting in-progress works, including this fascinating little tidbit:

Using my teeny weeny brush to paint teeny weeny characters in a teeny weeny amount of time to create a colossal double cover for a huge new project that’s going to give you a whopper of a Trek-gasm when @idwpublishing announces it!!! 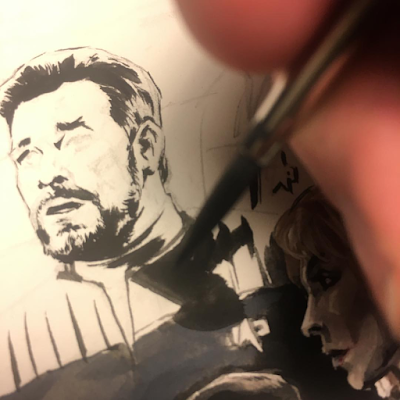 To coin a phrase: Fascinating! What could this project be? We see will Riker and Crusher, with Riker wearing a TNG film-era uniform. To add an even more interesting twist to this story, Woodward posted this the day before:

Good morning instagram! I’m up WAY too early on Saturday morning, painting Quark.theres gotta be a rule of acquisition that can get me out of this?? Yes? #startrek #startrekart #wip 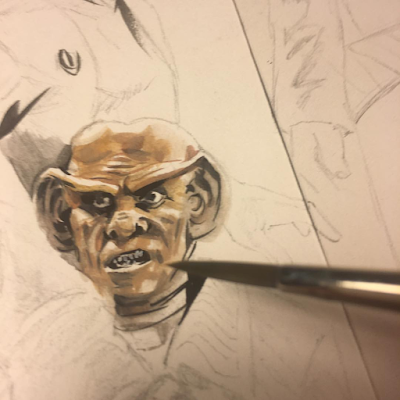 Could this piece featuring Quark be a part of the same "colossal double cover"? Woodward wasn't forthcoming when asked on Twitter, but I do plan on seeing him at his table this weekend at the Edmonton Comic and Entertainment Expo. I'll be sure to ask if there is anything he can reveal!