Outpourings of grief and condolences—from Star Trek fans and non-fans alike—are all over the Internet today as it has been reported that Leonard Nimoy, 83, has passed away. Most well-known, of course, for the role of Mr. Spock, Nimoy will be remembered by legions of his fans.

Mr. Nimoy will always be remembered as a wonderful man with a happy and joyful soul. I had the pleasure of meeting him at a convention in Calgary, Alberta in 2010. He was a thrill to meet and a distinct pleasure to talk to. He was really the first "celebrity" I met in real life, and I remember thinking that he seemed very friendly and open to meeting his fans. I will always remember that afternoon in Calgary and the joy I felt in talking to him one-on-one and listening to him speak to the assembled group of fans.


"He lived long, he prospered, and he inspired. He was more than Spock; he was someone's son, someone's father, and a friend to many more. He was our fellow traveler. And now he is legend. Rest in peace, Leonard Nimoy."


And finally, I had to share this: Leonard Nimoy's final tweet, a fitting farewell from this treasure of a man: 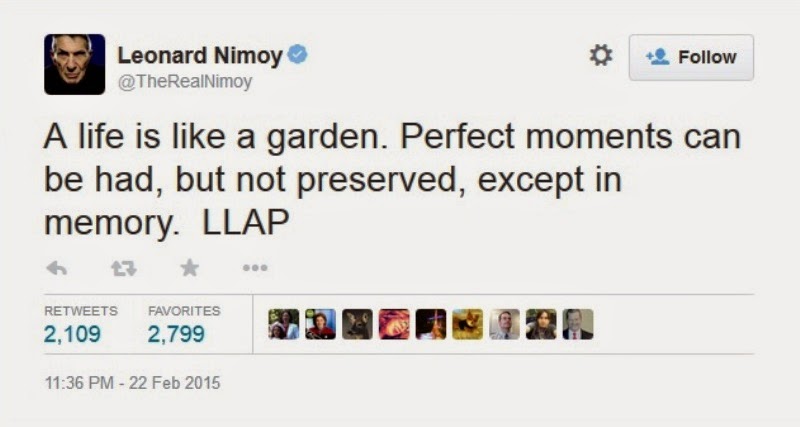 Goodbye, Leonard. You will be sorely missed.