NEWS: Solicitation cover revealed for next year's Plagues of Night

Hi everyone!  I'm really excited about next year's line-up of Trek novels.  I'm looking forward to Greg Cox's new TOS novel The Rings of Time as well as the planned TNG trilogy by one of my favorite authors, David Mack.  Unfortunately, details on this trilogy are scarce at the moment.

Another pair of releases coming up next year are David R. George III's Typhon Pact duology, Plagues of Night and Raise the Dawn.  Simon and Schuster have just released a preliminary cover for Plagues of Night, and it's pretty impressive.  Keep in mind, this is only a retailer solicitation cover, and the final version may look very different: 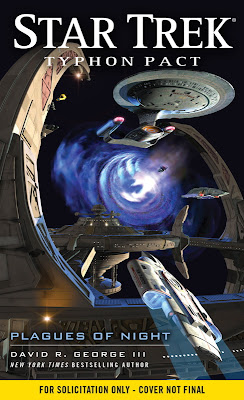 I have updated the 2012 Releases page with the new cover.

The back-cover blurb for Plagues of Night has also been released:

In the wake of the final Borg invasion, which destroyed entire worlds, cost the lives of sixty-three billion people, and struck a crippling blow to Starfleet, six nations adversarial to the United Federation of Planets -- The Romulan Star Empire, the Breen Confederacy, the Tholian Assembly, the Gorn Hegemony, the Tzenkethi Coalition, and the Holy Order of the Kinshaya -- joined ranks to form the Typhon Pact.  For almost three years, the Federation and the Klingon Empire, allied under the Khitomer Accords, have contended with the nascent coalition on a predominantly cold-war footing.  But as Starfleet rebuilds itself, factions within the Typhon Pact grow restive, concerned about their own inability to develop a quantum slipstream drive to match that of the Federation.  Will leaders such as UFP president Bacco and RSE Praetor Kamemor bring about a lasting peace across the Alpha and Beta Quadrants, or will the cold war between the two alliances deepen, and perhaps even lead to an all-out shooting war?


Plagues of Night is due to be released in June of 2012.  You can read its entry in the Simon and Schuster catalog here.
Posted by Dan Gunther at 5:09 PM