Literary Treks 280: The Rigellians Are Psycho 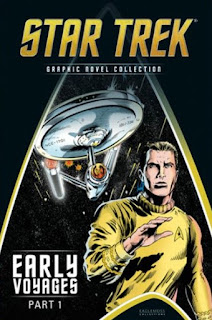 Captain Christopher Pike has played a large role in the Star Trek universe over the past year, and we have made a concerted effort to take a look at the books that chronicle the adventures of this captain of the Enterprise. So it only makes sense to cast our gaze back to the late '90s, when Marvel Comics briefly held the licence to print Star Trek comic books, and released a series based on the voyages of the U.S.S. Enterprise under the command of Chris Pike.

In this episode of Literary Treks, hosts Dan Gunther and Bruce Gibson are joined by Shahank Avaaru and Barry DeFord of the Trek Geeks podcast Poli-Treks to discuss the first four issues of Star Trek: Early Voyages. We talk about the crew's introduction in "Flesh of My Flesh," a face-off with the Klingons in "The Fires of Pharos," the crisis on Rigel VII in "Our Dearest Blood," and revisit Talos IV from a new perspective in "Nor Iron Bars a Cage." We wrap up with our final thoughts and ratings and where Barry and Shashank can be found online.

At the top of the show, we respond to your feedback on the Babel Conference for Literary Treks 278: His Losses Continue to "Mount."