Star Trek: The Next Generation
Through the Mirror
IDW Comics miniseries 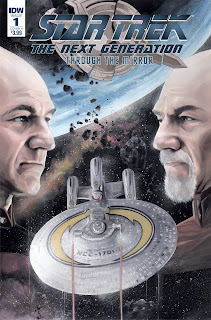 In the dreaded Mirror Universe, Captain Jean-Luc Picard and his crew aboard the fearsome I.S.S. Enterprise plot to raid our universe for valuable plunder to fuel the ever-expanding war machine of the Terran Empire. Unbeknownst to the Enterprise crew in the Prime Universe, infiltration of Starfleet by Mirror-Picard and his crew has already begun...

In this episode of Literary Treks, hosts Dan Gunther and Bruce Gibson are joined by Trek.fm's own Amy Nelson to talk about the five-part IDW Comics miniseries Through the Mirror. We discuss each issue of the series, which features two stories running in tandem: story A, in which our heroes must thwart an attempt by the mirror crew to steal resources from our universe, and story B, in which the mirror Commander Data attempts to track down former Emperor Spock and learn the secrets of the prime universe.

In the news segment, Dan and Bruce review the second issue of the Star Trek: Discovery: Succession comic miniseries.