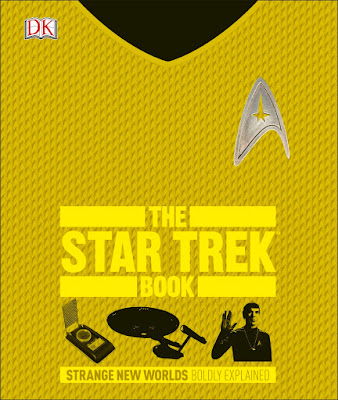 
Who was the captain of the first Starship Enterprise? In which galactic quadrant is planet Earth located? And just what is the trouble with tribbles? Covering several centuries of intergalactic history, The Star Trek Book answers these questions and many more.

This comprehensive guide contains in-depth explanations of technological advances and key events in the Star Trek universe. It also includes detailed profiles of memorable characters, such as Starfleet personnel as well as their allies and enemies.

Packed with informative graphics, memorable quotes, and stills and props from the television series and movies, this book boldly explores and explains everything you need to know about 50 years of thrilling adventures across the final frontier.

Unless you have been living under a rock, you know that 2016 is Star Trek's 50th anniversary. With that milestone occasion, we have seen an increase in the number of tie-in media and products being released. One such tie-in, The Star Trek Book, promises to be a comprehensive, authoritative guide to the Star Trek universe. Does this title meet those expectations? Can it possibly rise to the occasion of being a "comprehensive" overview of this franchise that spans 50 years and boasts a fanbase that is singularly critical of all incarnations and knowledgeable about all aspects of said franchise? Read on to find out!

First off, this book is laid out very well. It is divided into a number of sections that highlight various aspects of Trek. A general overview starts out the book, introducing the reader to the broad strokes of the setting of Star Trek. Next comes "Starfleet," in which each of the main characters from the various series is profiled. Most of the characters get a two page spread, except for the TOS characters who get four: two for the prime universe, and two for their "Kelvin Timeline" counterparts.


"Federation Allies and Enemies" is next, showcasing various species, groups, and individuals from throughout Star Trek history. These are the main ones, like the Klingons, the Cardassians, Khan, and the Maquis. After that comes "Science and Technology," in which Star Trek staples like warp drive, the transporter, and holodecks are explored. Finally, "New Life and New Civilizations" concludes the book, with a look at a few of the "leftovers"; aliens that are somewhat important to Star Trek as a whole, but maybe didn't quite make the bar for the previous section. V'Ger, The Guardian of Forever, and the Pah-wraiths are a few examples of topics in this category.


This surprisingly effective layout makes it really easy to find the particular section you're looking for, especially with the clear table of contents as well as an extremely thorough index. Can't quite remember what species Kes was? It's easy to look it up in seconds.

If you are a casual Star Trek fan, or even a newbie, this book is a really great introduction to the franchise. There is a lot of information here, but it is organized quite effectively. The broad overviews serve as a terrific way for a new fan to quickly get up to speed, while at the same time presenting information in a new and interesting way so that even the most hardcore fan can get enjoyment from the book. The graphics are often fun, illustrating concepts like the Vulcan mindmeld or Kirk's doppelgangers throughout the years. 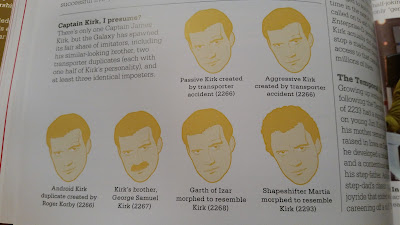 Given the limited space in the book, I often found myself impressed with just how much information the authors managed to include. While hardly near the scope of the Star Trek Encyclopedia (of which we will soon have an updated version), the amount of research and information crammed into this book is impressive. You won't find an episode-by-episode guide, but you will also be hard-pressed to think of a crucial piece of the Star Trek tapestry that the authors of this books missed!

Even for a hardcore fan like myself, who has basically every fact from every series and film in the Star Trek universe memorized, The Star Trek Book nonetheless will have a place on my bookshelf. Beautifully laid out and featuring gorgeous full-color photos and illustrations, this book is perfect for the newbie to Star Trek, as well as the more seasoned fans. A few years ago, a friend of  mine who had seen the 2009 Star Trek film wanted to get into the rest of the Trek universe. I gave her a copy of Star Trek 101 by Terry J. Erdmann and Paula M. Block. While I still really like that book, I think that if it were around at the time, I would have included The Star Trek Book as well. The overview of the Star Trek universe that it provides is simply unparalleled. A great gift for trekkies, trekkers, and trek-curious alike!


Next time on Trek Lit Reviews:

Playing a bit of catch up here! Next review is for Dayton Ward's latest, The Original Series: Elusive Salvation, a sequel to his excellent novel From History's Shadow. Coming soon!