Spoilers ahead for Chain of Attack!


While mapping a series of gravitational anomalies, the Enterprise is suddenly hurled millions of light-years through space, into a distant galaxy of scorched and lifeless worlds ... into the middle of an endless interstellar war.

With no way back home, the crippled starship finds itself under relentless and suicidal attack by both warring fleets! And Captain Kirk must gamble the lives of his crew on his ability to stop a war that has raged for centuries -- and ravaged a galaxy...

A starship flung far from home, a crew worried that they will never see home again, and an idiotic bureaucrat aboard making life miserable for Kirk and company. Just another day in the lives of our intrepid heroes aboard the Starship Enterprise!


For the most part, Chain of Attack is an interesting read. A lot of classic Trek elements are there: facing the unknown; reason and understanding winning out over aggression and belligerence. Overall, the novel has a very familiar feeling, but not to the point of seeming overdone or derivative. One small exception is the inclusion of a particular element that has often shown up in Star Trek: an outsider coming aboard the Enterprise and generally being, without putting too fine a point on it, an ass. This particular plot element certainly approaches being used too often. The main difference here, however, is we get something we don't usually experience in the televised episodes of Star Trek: the ability to see things from the aforementioned ass's viewpoint.

In Chain of Attack, the annoying bureaucrat is Dr. Crandall, a supposed "expert" on the sensor technology that the Enterprise is testing at the beginning of the novel. Throughout the book, we get glimpses of how he sees the crew of the Enterprise: self-serving hotshots who have no regard for anything other than themselves and who court danger at every turn for their own amusement. Of course, nothing could be further from the truth, and in fact, seeing things from Dr. Crandall's point of view made me think that he was some sort of sociopath. His projection of hateful thoughts on the part of the Enterprise crew borders on paranoia. I think everyone has had the experience of putting emotions and thoughts on others that they didn't actually have, and in this way, I could kind of understand the viewpoint of Crandall. However, he took it to near-psychotic lengths. I think Captain Kirk let him off far too easily, and is also responsible for putting the Enterprise in danger through his inaction in allowing Crandall access for far longer than seems appropriate or prudent. Of course, at the end of the novel, Crandall turns around 180 degrees and becomes a self-sacrificing saint, a plot development that I felt rang a little untrue. Even despite Crandall's revelation and redemption at the end, the captain seems a little too forgiving.

Despite the small stumbles with regards to the character of Crandall and his odd motivations and behaviours, the story is a fascinating one. The cultures that developed due to the unique circumstances in this remote region of space were interesting to read about, and the final resolution was very satisfying. However, one more small quibble: at one point towards the climax of the novel, both Spock and Crandall breathe in and hold their breath before being exposed to hard vacuum. As anyone who has researched the effect of a vacuum on the human body can tell you, this is a very bad idea!

An interesting story overall, with a few minor issues with regards to the main guest character. This is the first novel of Gene DeWeese's that I have ever read, and it was added to my "to read" list shortly after he passed away last year. Chain of Attack was a great Trek novel experience, and I'm looking forward to reading more of the novels he wrote during his lifetime in the future.

Next up is the newest release, The Original Series: The Folded World by Jeff Mariotte. I managed to get my hands on this one pretty early, but reading time was cut into by the Calgary Comic and Entertainment Expo this past weekend. However, I hope to be finished it soon! Look for a review shortly, and in the meantime, behold the awesomeness that is Wil Wheaton: 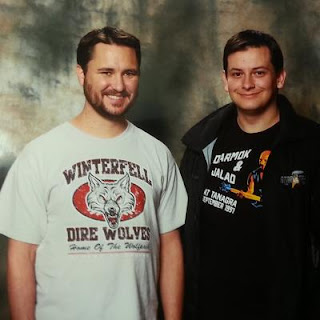 Live long and prosper, everyone!